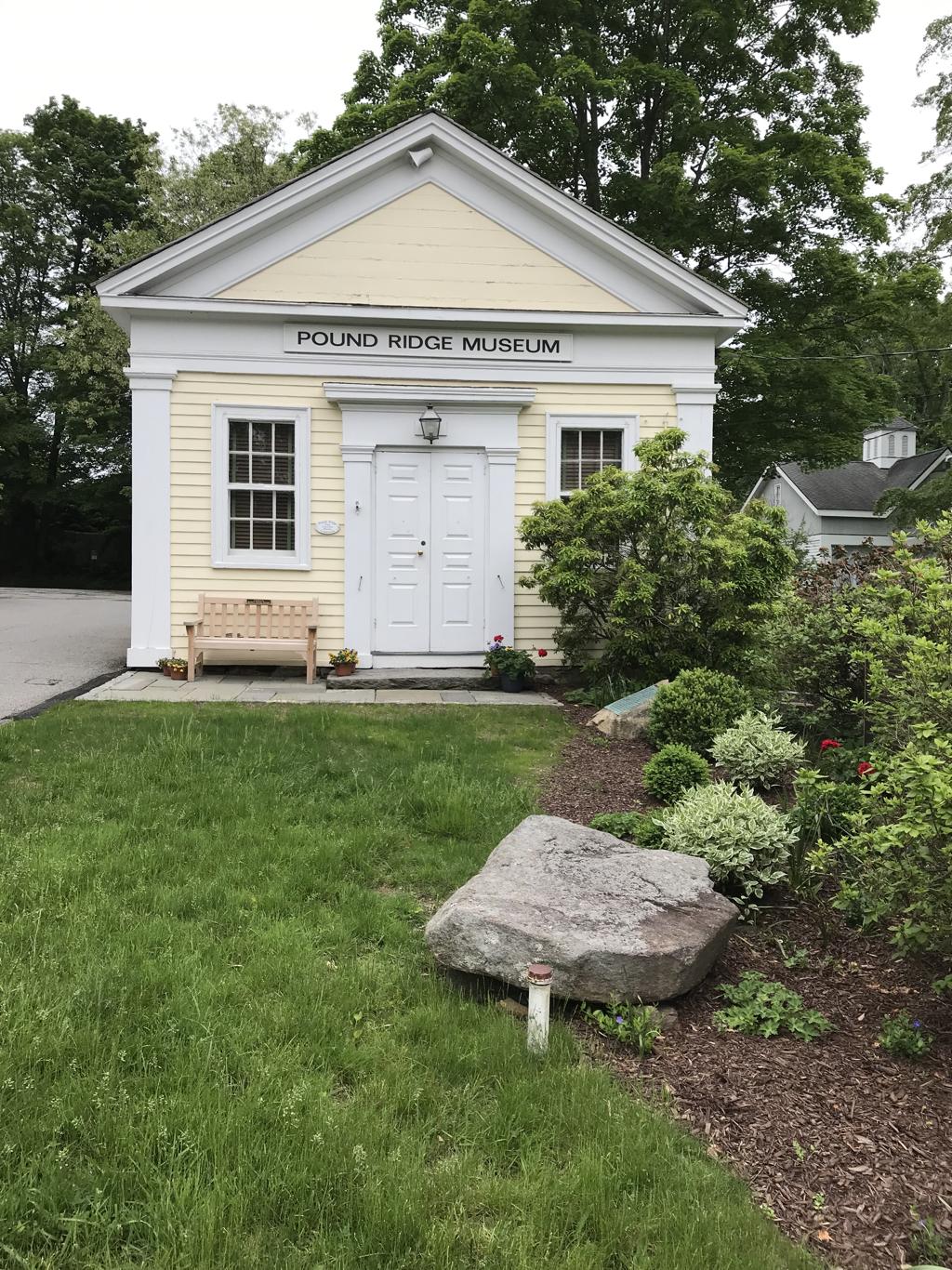 The Pound Ridge Historical Society is a group of local historians who are dedicated to preserving the history of the area. They are a member of the National Trust for Historic Preservation, and they work with other organizations to help protect the historic buildings and the natural landscape of the hamlet. Some of the buildings that are located in the hamlet are included in the National Historic District.

Pound Ridge Historic District is located in far eastern Westchester County, New York. It includes nearly all of the hamlet, which is centered on a small plateau. The district encompasses approximately 95 acres and contains 46 contributing buildings.

In 1737, John Tyler built his farmstead in Pound Ridge. During the 1860s, the Lockwood family became a dominant force in the town. They served as leaders in the Presbyterian Church and served as the town supervisor from 1772-1868.

Many residents moved to Pound Ridge in the 1920s and 1930s from nearby cities. The automobile allowed people to move into the city and commute to work. As a result, Pound Ridge became a bedroom community.

Pound Ridge was also a center for straw oyster basket making. At the time, the town was known as the “Basket Town” because of its abundance of these baskets. There were also cottage industries.

In 1971, the Pound Ridge Historical Society was formed with 18 members. One of the objectives of the society is to preserve the historical resources of the hamlet. This includes establishing a museum in a Greek Revival building that was constructed in 1853.

A number of churches and residences are also located in the historic district. Most are a mix of Victorian period and Mid-Century styles. However, a few structures from the post-nineteenth century are still in use.

The Pound Ridge Historic District is on the National Register of Historic Places. The district is located along Pound Ridge Road and Westchester Avenue.

The exhibit is co-curated by Carol Kurth, who is a mid-century modern design expert, and Susan Grissom, an artist. The resulting exhibition, which will be open to the public on Sunday, April 23, follows the society’s annual meeting at Conant Hall in Pound Ridge at 1:30 p.m. All are welcome to attend.

The exhibit will be held in conjunction with the Pound Ridge Garden Club’s 75th anniversary, which will also be celebrated with an exhibition. This year’s theme is honoring Hiram Halle, a philanthropist and inventor who made a major impact on Pound Ridge’s development.

The museum, which is open Saturday-Sunday from 2-4 p.m., is located on the National Register of Historic Places. It is housed in a Greek Revival building that dates to 1852.

Pound Ridge’s historic district is a collection of 31 principal buildings in the hamlet. Most of the houses were built during the late nineteenth and early twentieth centuries. Many were designed by prominent young couples.

A large portion of the buildings in the district were constructed with the help of businessman Hiram Halle. Halle was an American businessman, philanthropist, and inventor. He was a leader of the Jewish community in World War II and he contributed to the restoration of 33 historic structures in Pound Ridge.

Another notable architect was Vuko Tashkovich, who worked with Eliot Noyes in New Canaan. He built twenty-eight houses in the town.

The Pound Ridge Historical Society has a lot to be proud of. During the mid-twentieth century, our town was the epicenter of a polio epidemic that lasted for over a decade. As the ravages spread across the nation, the medical community and public health officials stepped up their game. In the ensuing years, the city saw its share of high profile polio cases, as well as many lesser known victims.

Aside from the numerous public service announcements, the town saw several major developments, including the founding of the New York State Health Department and the establishment of a number of special polio clinics. The state opted to take the lead in this regard and had its own vaccine program, although it would be several years before the nation would see the benefit of its actions.

One of the most surprising findings of this period was the sheer number of polio cases. Several reports have cited estimates that upwards of 600,000 Americans were affected. It is not clear how much of this figure came from a lack of awareness and how much from poor management and a misguided belief that the affliction was confined to the northeast.

Other notable events of the era include the founding of the National Foundation for Infantile Paralysis, the creation of the World Health Organization and the invention of the Salk vaccine. This triumvirate of events ushered in a new era of public health in the United States.

Although the polio miracle was never achieved, many states did manage to make a dent in the number of victims. Most of the victims were of European descent. Some were infected as early as the 1930s. However, the outbreak only really reached its peak in the mid-1960s.

Basket making was a large business in the area. Baskets were used for a variety of purposes, including for fruit picking, laundry, and storing apples. These baskets were woven of oak splints or hickory.

In the late 1860s, the basketmaking industry was in its heyday. As a result, the population of the town increased to 1256 by 1800. However, competition from foreign products and the collapse of the oyster industry in the Sound caused the decline of basketmaking in the region.

The town was incorporated in 1788. By the beginning of the twentieth century, Pound Ridge was an agricultural community with an economy centered on dairy farming, shoemaking, and basketmaking.

The Pound Ridge Baskets exhibit is housed in the former meeting house of the Pound Ridge Historical Society. There, 19 baskets are displayed. Some of these baskets were made between 1880 and 1910.

Pound Ridge became known as the “Basket Town” for its straw oyster baskets. The town was located near the North Castle, Stamford, and Lewisboro borders.

There are currently 46 contributing historic buildings in the Pound Ridge Historic District. The district consists of 95 acres. This includes a number of churches and residences.

The museum relies on volunteers to keep the museum running. One of them is TJ Holland. He is a former cultural resources supervisor at the Junaluska Museum.

The Pound Ridge Historical Society in Westchester County, New York has a mission to preserve and enhance the history of Pound Ridge. While its population may have swelled from a few hundred in the mid 1800s to nearly 4,000 by the turn of the century, the town has maintained its small-town feel.

World War II ended the Great Depression and provided a boost to American economic growth. This spawned a host of federally funded public works projects. Some of the more notable programs included the War on Poverty and Head Start. These schemes were designed to help people in need and to prepare future generations of workers for the workforce.

Another program of interest was the Interstate Highway System. This program was a thirteen year, $26 billion endeavor that generated a number of spin-offs. Motels benefited from the system and gas stations made use of its plentiful fuel supply.

The “Full Employment” Bill, a measure passed by Congress before the end of the war, proposed government guaranteed jobs for all workers. A number of small businesses were encouraged to apply for a government subsidy to boost their growth. In the end, the program met with a ferocious amount of opposition from conservatives who considered it a bit over-the-top.

A similar program, the Volunteers in Service to America, was also designed to send volunteers to impoverished regions of the country. Unfortunately, this largely centered on the west coast and the Mid-Atlantic states.

Although a number of the proposed measures were enacted, the most important ones failed to achieve the intended goal. Perhaps the most impressive one was the Fair Deal. Among the other measures, Truman’s program incorporated several notable innovations. It included civil rights legislation for blacks, a national health insurance program, and government subsidies for small businesses.