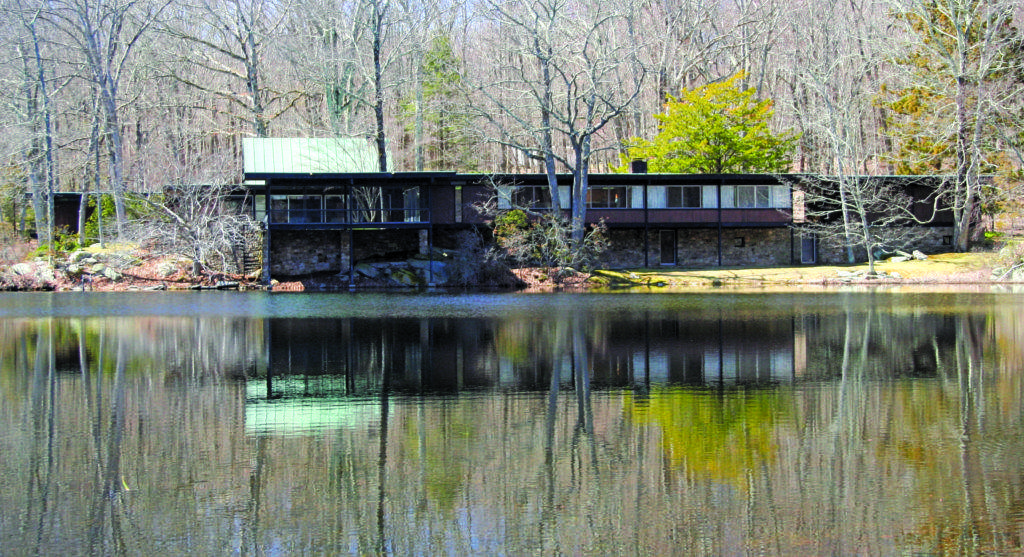 Modern in Pound Ridge: 20th Century Architecture and Lifestyle explores the Postwar evolution of the town and the family-oriented dynamics that have shaped the hamlet. A collection of photographs and drawings, this article provides a fascinating look into the history of the community and its architectural heritage.

Modern in Pound Ridge: 20th Century Architecture and Lifestyle is an exhibition hosted by the Pound Ridge Historical Society that explores the town’s rich architectural history. Featuring three-dimensional displays, striking photography and video storytelling, the exhibit shows how design evolved over the past seventy years. A public opening is scheduled for April 23rd, following the society’s annual meeting at Conant Hall in Pound Ridge.

The exhibit is a collaboration of the Pound Ridge Historical Society and local architects and designers. As part of the celebration, a sold-out benefit luncheon will be held at The Inn at Pound Ridge by Jean-Georges, followed by a private preview at the museum.

“Modern in Pound Ridge” is organized by a committee including Deborah Benjamin, Sharon Griffith, Rayanne Kleiner and guest curators Ellen Kearns and Susan Grissom. It will be open from 1:30 to 4 pm. During the exhibit’s public opening on April 23, visitors will be able to tour the historical society’s museum and the town’s only complete survey of Modern architecture.

Pound Ridge has a rich architectural history. Old Pound Ridge was first mentioned in city records in 1750. The town was a settlement of Wappinger First Nations tribes. In addition to its historical buildings, many contemporary structures feature period details.

In the 1930s and 1940s, Pound Ridge became a popular bedroom community for residents of surrounding towns and cities. During that time, the Civilian Conservation Corp built shelters and roads. As a result, many people came from New York City to live in the area.

Mid-century Modernism arrived in Pound Ridge in the early 1970s. This era of architecture and lifestyle combined efficiency with functionalism. Houses were designed with large windows to allow natural light and open interiors. Many of the houses were designed by prominent young couples.

Pound Ridge was one of the areas where Vuko Tashkovich began building houses in the late 1960s. He was born in Macedonia and worked for Eliot Noyes in New Canaan.

Family-oriented dynamics of the hamlet

Pound Ridge, located in eastern Westchester County, is a hamlet that is unique in its history and architecture. It is a small town that transitioned from a rural hamlet to an exurban bedroom community in the early twentieth century.

During this time, Pound Ridge remained a part of the Stamford area, although the town was no longer an important part of the city. Moreover, Pound Ridge lacked rail transportation to nearby cities. This situation was due in large part to the panic of 1893. However, it grew as a result of the expansion of the Lockwood family.

The Lockwoods were prominent in the local community for more than a century. They were leaders of the Presbyterian Church in Pound Ridge. During their time in the hamlet, they also maintained an agrarian existence.

Several of the older buildings in the community were renovated during the Colonial Revival period. These changes reflected the taste of the time, which removed many of the Victorian period embellishments and re-established symbolic Colonial details.

Postwar development of the town

Aside from the fact that it is a popular destination for nature lovers, Pound Ridge also offers visitors a wide variety of recreational opportunities. There are several trails, camping grounds and archaeological sites. It is also home to a small nature museum and is part of a protected area.

Historically, the town of Pound Ridge was a part of Cortlandt Manor. After the Civil War, it was named in honor of William Lukens Ward, the Westchester County commissioner. The township was laid out in a New York agricultural village model. During the early 1900s, it experienced a period of innovation. As a result, there are some noteworthy figures in the region.

In 1961, the Brockport plant of Owens-Illinois was built, which employed about 700 workers. This facility was later sold to Black & Decker in 1984. However, it is now vacant.

Another major development in the region was the construction of the General Electric plant in 1948. At its peak, it employed 1,100 people. Since 2001, it has been vacant.